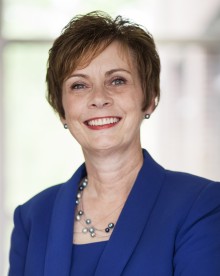 Anna McDaniel, Dean, was named a Virginia Henderson Fellow in support of nursing research at Sigma Theta Tau International Foundation for Nursing. This special giving program is named in honor of Virginia A. Henderson (1897-1996). Henderson is considered the foremost American nurse of the 20th century and recognized internationally for her lasting influence on nursing practice, education and research. As a Virginia Henderson Fellow, Dr. McDaniel is recognized for her philanthropic leadership in advancing research for nurses who are improving world health.

McDaniel has a history of funded research focusing on cancer control, from prevention (tobacco prevention and cessation) through survivorship (symptom management). She has served as the Dean of the UF College of Nursing since 2013 and prior to that served as Associate Dean for Research at Indiana University.