The College of Nursing is fortunate to have alumni and friends who donate money to support both the efforts of the college and also the students. Recently, one Gator Nurse alumnus made a gift to the college, and although it was not a monetary gift, its significance was profound.

On August 9, Air Force Flight Nurse Jake Silvola-Finch (B.S.N. 2012) participated in a combat aeromedical evacuation mission to recover wounded servicemen and women in Iraq. During Operation Inherent Resolve/Freedom’s Sentinel, Silvola-Finch officially flew the American flag in honor of the UF College of Nursing. This flag was then professionally framed with a certificate of authenticity and shipped to the College of Nursing as a gift in appreciation of Silvola-Finch’s nursing education that he received at UF.

“The UF College of Nursing provided me with the foundational nursing skills needed to be an Air Force flight nurse, but it also provided me with the confidence needed to operate in high-stress environments and be an effective decision maker whenever a patient’s condition declines,” Silvola-Finch said. “Every mission we fly is full of different challenges and new opportunities to lead. Gator Nurses graduate with plenty of leadership skills and the confidence of knowing they were trained at one of the best nursing programs in the country.”

After earning his B.S.N., Silvola-Finch worked at Moffitt Cancer Hospital in Tampa. He joined the Air Force reserves to serve as a flight nurse a little over a year later and returned to UF to earn his Master of Health Administration. He is now serving a five-month deployment overseas.

“Nursing is already a rewarding, purposeful career no matter where you work or who you take care of,” he said. “But to be able to provide medical care to our wounded warriors who are willing to sacrifice their lives for the lives of others is an opportunity and an honor I couldn’t pass up.” 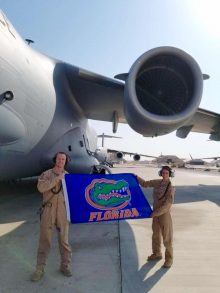 Silvola-Finch is not the only Gator Nurse currently serving our country in the military. In fact, when his deployment ends in October, Gator Nurse Kaitlyn Kraemer (B.S.N. 2012) will be his replacement. One of his greatest joys and blessings in life is having the ability to serve and represent the United States. He said the American flag, like the one he gifted to the College of Nursing, is a powerful, significant symbol to every American, and especially those in the military.

“This is truly the most meaningful work I’ve ever done, and without my education from UF CON, I wouldn’t be able to do what I’m doing,” he said.