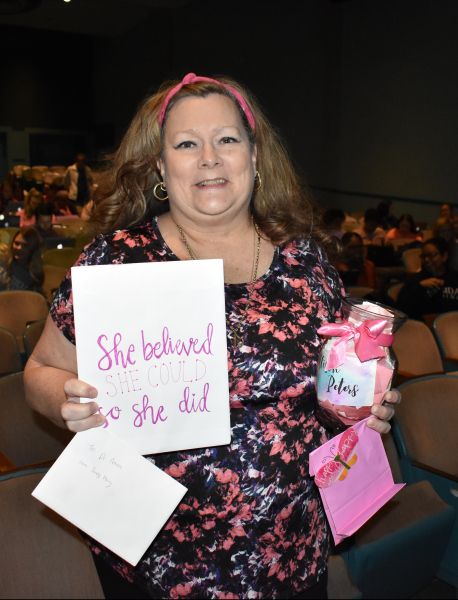 For some, Breast Cancer Awareness is more than just a month on the calendar. After 16 years of remission, UF College of Nursing Clinical Assistant Professor Allison Peters, DNP, RN, CNOR, NEC, heard the words she least wanted to hear: Cancer has returned. After a year of chemotherapy and proton radiation therapy, Peters is open about her experience, which she says is no different than so many others.

After her first diagnosis in 2002, Peters is diligent about performing self-breast exams and having her yearly mammogram. In October of 2018, she found a Cheerios-sized lump in her breast.  Chemotherapy was started immediately, in an effort to reduce the size of the tumor and diminish the chance of the cancer spreading.  Upon completion of chemo, a mastectomy and axillary lymph node dissection was performed. The diagnosis was grim: 20 out of 25 lymph nodes were positive for metastatic breast cancer. Despite a lifetime precaution to radiation exposure, the decision was made to undergo 30 focused, proton radiation treatments.

Her College of Nursing family rallied around her. A class of 125 Bachelor of Science in Nursing seniors arranged a day last fall when they would all wear pink and present their instructor with cards of support and gifts of inspiration. Fellow faculty and staff created a GoFundMe account where colleagues and friends could contribute; to help defray the costs associated with diagnosis and treatment.  Donations were collected for restaurant and gas station gift cards for those days when exhaustion and sickness made cooking impossible. And a greeting card was circulated every week for colleagues to write messages of strength and wishes for healing.

“The support I received and continue to receive from everyone at the College of Nursing has been so phenomenal,” Peters said. “When you’re going through something like a cancer treatment, it helps to know that people are praying for you and love you.”

Senior BSN student Rebecca Gomez bought pink headbands for her clinical group to wear during her first semester in the program when she found out Peters was a breast cancer survivor. When Gomez found out the cancer had returned, she said her class was heartbroken.

“I remembered all the moments in the clinical setting where we would all walk the halls and Dr. Peters would be greeted by colleagues who were happy and excited to see her,” Gomez said. “There is a sense of joy that follows her wherever she goes. I admire how even though she was handed an awful hand of cards, she doesn’t allow that to take away the joy and compassion she has for others.”

Over the last year, Peters underwent five months of chemotherapy at UF Health in Gainesville. She recently wrapped up a grueling, daily treatment of proton therapy for six weeks at UF Health Jacksonville.

“The cancer doesn’t hurt,” Peters said. “It was the treatment that I thought was going to kill me.”

Unable to make the drive from Ocala to Jacksonville every day or face additional expenses paying for a hotel room, Peters was invited to stay with Clinical Lecturer Shari Huffman, MN, APRN, CNE, CPNP-PC, who opened her Jacksonville home during those weeks of treatment. Huffman, who teaches Accelerated BSN students at the college’s Jacksonville campus, said she never thought twice about Peters staying with her.

“Allison is so proud and doesn’t want to put anyone out,” Huffman said. “It took a while to convince her to stay with me and my husband. But we have the room and our home is only 15 minutes from the hospital, so it made sense.”

Having Peters as a roommate actually turned into a blessing in disguise for Huffman. It was during Peters’ treatment that Huffman herself was diagnosed with stage three melanoma and thyroid cancer.

“It felt like a blessing having Allison there during that challenging diagnosis,” Huffman said. “Nurses kind of keep things in, but I could vent to her and tell her things about my diagnosis that I couldn’t say to others. And she and I could bounce things off of each other and tell each other ‘it’s going to be ok.’ We just helped each other through a difficult time. Plus, my husband got really used to her cooking!”

Peters knows that the battle is not over for her. In November, she will begin another six months of chemotherapy, but she stays busy teaching and remains involved with college committees. Her new focus is encouraging women to perform self-breast exams and get annual mammograms — a mantra echoed by Huffman who speaks of the importance of sun protection and annual checks at the dermatologist.

“People tell me I’m an inspiration, and I don’t know why” Peters said. “I get my strength from those around me who have continued to support me and lift me up.”

Gomez said that the strength and resilience Peters has shown has influenced her role as a future nurse.

“In our short clinical experience, Dr. Peters instilled the importance to always do our best and continue to learn. Her strength has inspired me to continue my education. If I can be even half of the nurse that she is, it would be an absolute success in my eyes.”