To commemorate Black History Month, every week the College of Nursing will highlight a pioneering, accomplished Black Gator Nurse. Rose Rivers, PhD, RN, NEA-BC, FNAP, (BSN 1988, MSN 1999, PhD 1995). Dr. Rivers is the founder, principal and primary consultant for Restoring Joy to Leadership, a spiritually based organization dedicated to helping leaders maximize their potential to make a difference in the lives of others as well as their own. Dr. Rivers has served as vice president and chief nursing officer for St. Vincent’s Medical Center, Jacksonville, and Shands Healthcare (now UF Health), Gainesville. She is an active American Nurses Credentialing Center Magnet™ appraiser. Starting at age 16 in a Florida nursing home, Dr. Rivers advanced steadily through a series of nursing positions and educational degrees, most of them in Gainesville at the University of Florida and its primary teaching hospital, the 576-bed Shands Hospital at the University of Florida. Dr. Rivers has broken many barriers and received numerous accolades during her nursing and leadership career. An honorary Rose Rivers Scholarship was created to honor Rivers at UF Health Shands. 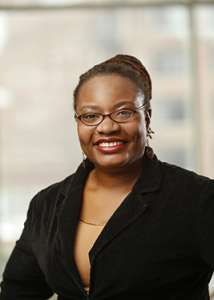 Natalie Leblanc, PhD, MPH, RN, BSN, is an assistant professor and Dean’s Endowed Fellow in Health Disparities at the University of Rochester School of Nursing and was named a visiting fellow in the Research Education Institute for Diverse Scholars (REIDS) at Yale University’s School of Public Health. She graduated from our accelerated BSN program in 2012. The overarching goal of Dr. Leblanc’s research is to develop new, innovative ways to address health inequities among vulnerable individuals. Her work, which is strengthened by her 15-year career in public health, has focused on health promotion and disease prevention among neglected populations both in the United States and abroad. Her wide-range of work in public health included managing programs aimed at disease prevention and eradication in Africa, integrating HIV testing and linkage to care strategies in the New York City Health Department, and conducting a needs assessment for a universal hospital-based HIV testing program in Ghana, West Africa. 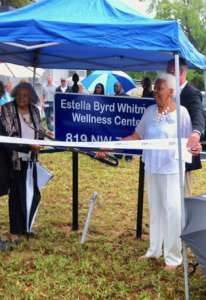 The Estella Byrd Whitman Wellness Center in Ocala will be celebrating its first anniversary this spring. The wellness center is the brainchild of Carolyn Adams (BSN 1972, MSN 1973) and grew from a need for health care that she and her husband, Arthur, recognized in their community years ago. The clinic experienced many delays for eight years due to uninhabitable space, illness, funding and approvals. Plans were put on hold when Arthur’s health declined and he passed away in 2013. But it wasn’t long before Adams was back working on the dream they had together. Now the wellness center lives in a new doublewide mobile home and offers educational programs and resources to the community. As CEO, Adams has also partnered with the local health department and a local dental clinic to provide health services on a regular basis. Adams and her husband moved up to Ocala about 10 years ago from South Florida, where she spent her career as an employee health nurse and an assistant hospital administrator in Broward County. Named after Adams’ grandmother, the clinic was partially modeled after our own Archer Family Health Care. Dee Williams was Adams’s classmate and provided advice along the way. Click here to read the full story.